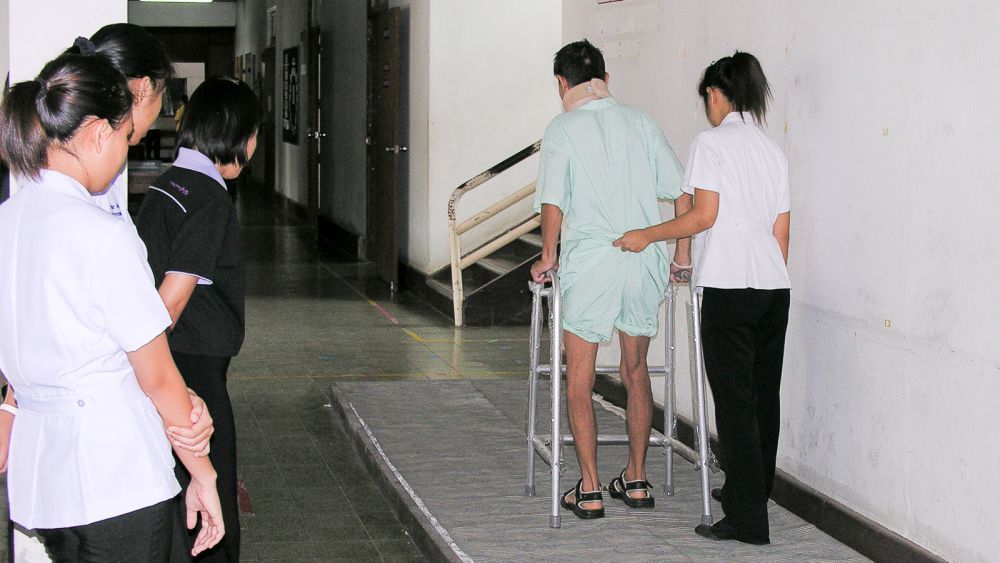 The Start of the Rehab-Cycle®

At the time of the initial assessment that took place two weeks following the accident, Mr. Dee's rehabilitation team found decreased joint mobility in his ankles, severe spasticity in the lower extremities and severely reduced muscle power functions in his legs, arms and trunk. As a result, he showed reduced involuntary movement reactions. In addition, Mr. Dee’s touch functions were impaired in the area below his level of injury. Besides the sensory problems, Mr. Dee was unable to control his urination and defecation at all.

With regard to activities and participation, the rehabilitation team found severe and complete problems in changing and maintaining body positions, in transferring, fine hand use, and accordingly, in the execution of many activities of daily living that required some level of mobility capacity, such as self-care.

The team also recognised the importance of both remunerative employment and Mr. Dee’s overall reintegration into his community.

The rehabilitation team's assessment results were also reflected in statements made by Mr. Dee himself.

Mr. Dee characterised aspects of his body functions as "not working like normal". He indicated a lack of control over his hands and legs, struggling with spasticity that increased after exercise. Mr. Dee stated that the spasticity in his hands made grasping objects difficult, and activities like washing himself and walking were also negatively impacted by spasticity. Moreover, Mr. Dee experienced decreased sensations and sometimes numbness in his hands and legs.

The problems he was experiencing worried him, particularly with regard to his ability to return to work. Mr. Dee had concerns about the “strength of his spine” and whether it would support the physical demands that farming required. He foresaw the challenges that returning to his pre-injury job would present and worried about being able to earn an income after leaving the hospital.

Drawing a Picture on Contextual Factors

The interviews with Mr. Dee also revealed information about environmental and personal factors that influenced Mr. Dee's functioning. At admission, Mr. Dee was completely dependent on his wife for all aspects of care. Family support proved to be important at a later stage of rehabilitation.

In talking with Mr. Dee, a number of barriers, primarily related to accessibility in and around his pre-injury home, came to light. For example, Mr. Dee's house was built on stilts and was surrounded by uneven ground, and the pit toilet was located 20 metres from his house. Other barriers included his limited financial resources, lack of assistive devices available to him, and the physical demands of his job as a farmer.

However, there were also contextual factors that later facilitated rehabilitation and community reintegration – a supportive wife and family, an educated daughter, and access to healthcare. Mr. Dee also indicated that he accepted his situation.

Mr. Dee's statements about his functioning status as well as the results of the rehabilitation team assessment findings were documented on the ICF Assessment Sheet, an overview of the statements and assessment results structured according to the components of the International Classification of Functioning, Disability and Health (ICF) – body functions and structures, activities and participation, environmental and personal factors. See1). See table 2. The documented information served as the basis for creating an ICF Categorical Profile.

Care In Low and Middle-Resource Countries