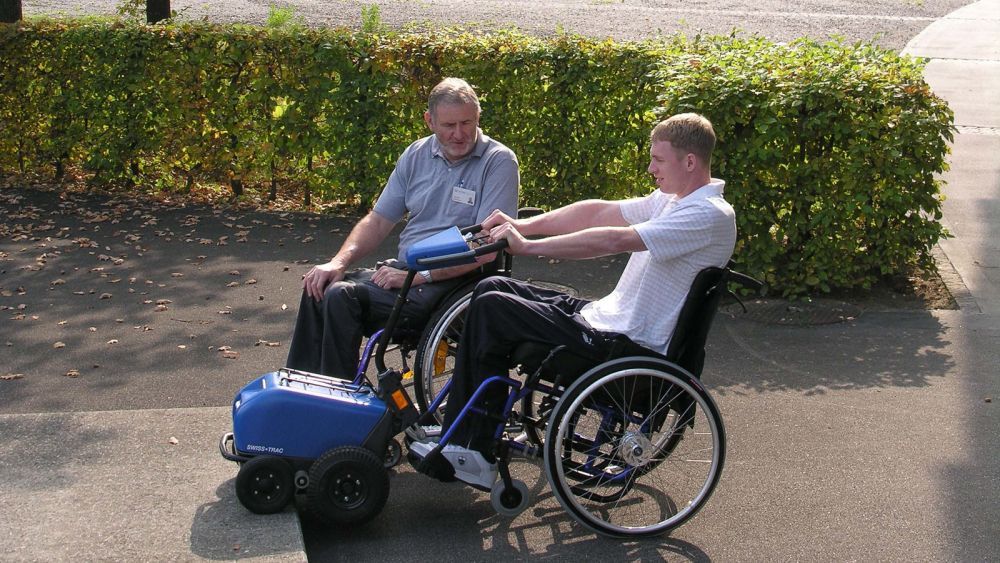 The physical therapist focused on the interventions related to the body functions and the movement-oriented intervention targets corresponding to Martin's cycle goals of independent mobility and optimized motor functioning. For example, the physical therapist provided regular manual therapy to help alleviate the back and upper extremity pain Martin experienced. Daily endurance and circuit resistance training was implemented to built up Martin's exercise tolerance and strengthen his muscle power in the body region above the level of his injury.

In the previous Rehab-Cycle® hippotherapy alone showed minimal success in reducing Martin's spasticity. In the new Rehab-Cycle®, the physical therapist implemented aquatic therapy and another trial with hippotherapy together with acupuncture provided by Martin's physician.

With regard to movement-related intervention targets and mobility, the occupational therapist provided, for example, wheelchair training outdoors, including the use of Swiss-TracTM, to help Martin reinforce his ability to manoeuver his wheelchair around obstacles and over various terrain. This was especially important, since his family lived in a hilly and forested environment.

Also essential for community reintegration and Martin's independence in mobility was the ability to drive an adapted car. Therefore, the occupational therapist also implemented a program of driver’s training that culminated in a driving test.

"Also essential for community reintegration and Martin's independence in mobility was the ability to drive an adapted car."

While the medical and traditional therapies were fundamental to regaining Martin’s independence, other “non-medical” interventions were equally vital to successful transition to the community and independent living. These interventions addressed Martin's cycle goals that focused on employment, recreation and leisure, transportation and housing.

"..."non-medical" interventions were equally vital to successful transition to the community and independent living."

For instance, Martin worked with a psychologist on further improving his decision-making skills and dealing with the stress related to not knowing how his life would be beyond rehabilitation, especially with regard to employment and housing. In weekly counselling sessions Martin and the psychologist also worked on a number of relevant personal factors, including Martin's negative-leaning perception of his body.

Environmental factors played an important role in achieving Martin's targets for independent transportation and housing. To facilitate Martin’s mobility, the occupational therapist together with the social worker took the lead to find and order assistive devices, such as the Swiss-Trac™, and acquire an adapted car, as well as to clarify the cost coverage for the devices and adaptations of the car. They also worked closely on clarifying possibly arrangements for wheelchair-accessible housing.

Finally, VR counselling continued to play a major role in facilitating Martin's return to work, one of the most important aspects of his community reintegration. Following up on Martin's completion of the first phase of VR (as described in case 7), the VR counsellor guided Martin through the last two phases of VR i.e. phase 2 ‘clarification and decision phase’ and phase 3 ‘integration phase’. Phase 2 built upon the successes of phase 1 – greater trust, increased motivation and improved decision-making skills – aimed at developing new skills that can compensate for lost resources, deciding on the career path to pursue, and establishing a plan for phase 3, the integration phase. Phase 3 involved searching for employment or an apprenticeship.

"VR counselling continued to play a major role in facilitating Martin's return to work, one of the most important aspects of his community reintegration."

The VR interventions included the following:

The VR counsellor was initially reluctant to conduct the cognitive evaluation due to concerns that such a test could produce negative results and consequently hinder Martin’s progress. However, Martin felt that such a test would offer him a clearer picture of the vocational direction he should take and the possibilities he should explore. He was insistent, and the cognitive test was conducted.

The aforementioned interventions and the rehabilitation professionals responsible for providing the interventions was documented on Martin's ICF Intervention Table. See table 3.

At the end of Martin's second Rehab-Cycle® and first rehabilitation, an evaluation of his functioning status revealed which intervention targets were met and which still required improvement.