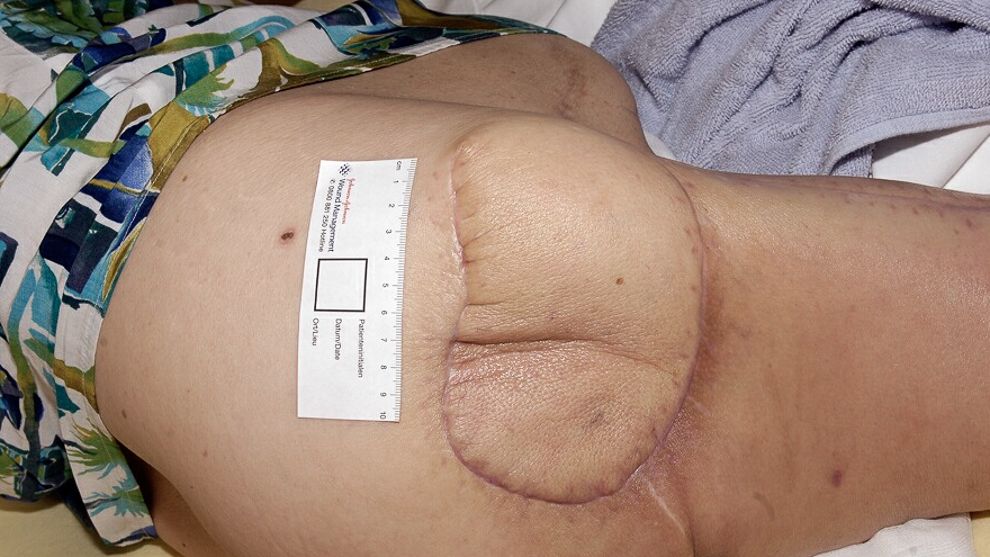 Against medical advice and at Monica's insistence she was discharged pre-maturely. Consequently, the (re-)evaluation of her health status took place only five weeks after starting intervention.

I’ll leave the rehabilitation centre the day after tomorrow. The doctors wanted me to stay for one more week to make sure everything is OK. I have to say, I’m just tired of the hospital.

Monica, one day before pre-mature discharge

The evaluation of Monica's health status revealed that there was some improvement, even if minimal, in the intervention targets identified during the assessment phase and success in achieving some of her goals. For example, cycle goal 1 ‘structure and healing of the skin’ was fully achieved; the post-operative incision and surgery were deemed to be successful. Likewise, the goals set for the intervention targets of ‘repair functions of the skin’ and ‘structure of areas of the skin’ were also achieved.

However, cycle goals 2 ‘mobility’ and 3 ‘looking after one’s health’ showed little improvement, not reaching any of the expected targets. Mobility only slightly improved with regard to Monica’s ability to transfer herself and with respect to muscle power. One cause of poor gains in cycle goals 2 and 3 was her lack of concern for the skin, although it was at risk for ulceration. Particularly problematic and worrisome for Monica’s rehabilitation team was Monica's lack of progress in looking after her health. After initially rejecting the interventions provided by the psychologist assigned to her team, stating that she did not need counseling nor psychological support, Monica later reluctantly interacted with one resident psychologist. Thus, it is of little surprise that the goals set for the intervention targets associated with health behaviour and health maintenance for the prevention of pressure ulcers were not met.

"Monica's lack of acceptance of her condition was considered a strategy to avoid addressing the risk factors..."

Monica's lack of acceptance of her condition was considered a strategy to avoid addressing the risk factors. For instance, there were episodes when Monica forgot to avoid pressure stress on her skin. She also showed little interest in self-checking her skin. The body awareness exercises implemented by the psychologist proved to be particularly challenging for her.

Despite these issues, Monica did show some improvement in ‘looking after one’s health’ i.e. from being a complete problem to becoming a moderate problem. She was also able to reduce her smoking from 40 to 10 cigarettes per day.

I’ve cut my smoking back to 8 or 10 cigarettes per day, and I’m happy keeping it there. I’ve been smoking for the last 40 years…I’m not going to stop now.

The results of the evaluation of Monica's functioning status is visualized on the ICF Evaluation Display. See table 3.

Table 3: ICF Evaluation Display; ICF Qualifier: rate the extent of problems (0 = no problem to 4 = complete problem) in the components of body functions (b), body structures (s), activities and participation (d) and the extent of positive (+) or negative impact of environmental (e) and personal factors (pf); Goal Relation: 1, 2, 3 refers to Cycle goal 1, 2, 3; SP refers to Service-Program goal; G refers to the Global Goal; Goal value refers to the ICF qualifier to achieve after an intervention; Goal achievement: + means achieved, - means not achieved