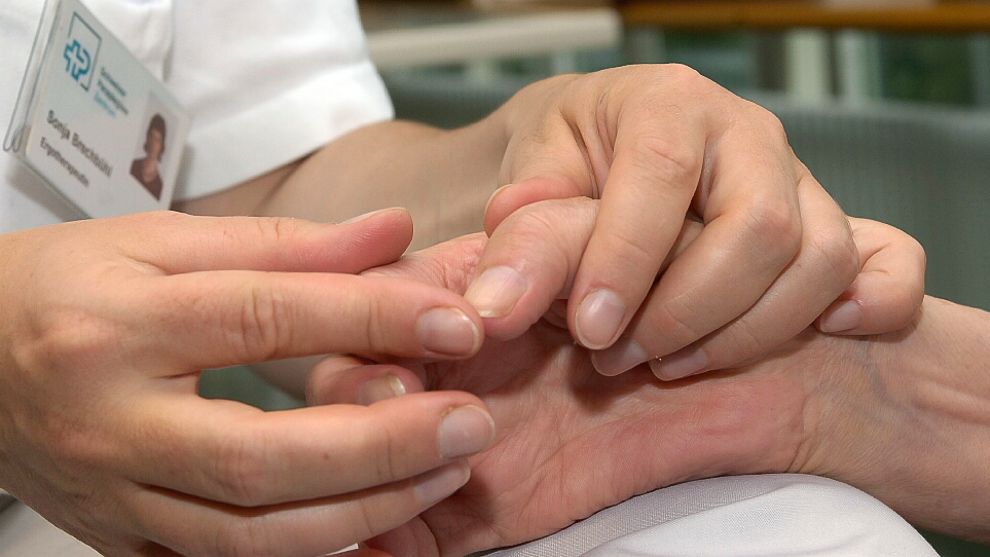 Helen’s tetraplegia left her with very little motor function. However, she could still feel sensations. As mentioned, her hopes focused on increasing her ability to wash and dress herself, and re-gain use of her hands.

Additionally, Helen had a number of other needs. Due to weakened musculature around her mouth, she found chewing to be strenuous and could only speak very quietly, leading to difficulties with communication and conversation. This latter issue compelled her to limit her visitors to family only; talking with friends was just too exhausting.

While she was able to breathe sufficiently, she required a ventilator at night to ensure her lungs were adequately ventilated. Lastly, Helen was having trouble in transferring herself into and out of bed, and she also felt very insecure moving around in her wheelchair.

The impairments Helen experienced due to GBS affected not only her range of motion but also her ability to fully breath, exercise, ingest food and water, and talk. Helen could control her respiration, but she was not able to inflate her lungs fully. Furthermore, while she could sense her need to urinate and defecate, she was unable to control her bladder nor her bowel movements. Based on the experience during the first Rehab-Cycle® and Helen’s recovery up to the time of the assessment, the rehabilitation team felt that substantial improvement in Helen’s hand functions was unlikely and that the prognosis was simply uncertain. As a result of the loss of functioning in her hands, Helen's ability to perform self-care was impaired. Self-care along with many of Helen's other activities of daily living were severely limited.

Contextual factors i.e. personal and environmental factors were also of importance in Helen's rehabilitation. For example, personal factors such as her hopeful and optimistic personality as well as her extensive knowledge about GBS (due to efforts by her daughter, a nurse, who informed her about GBS) served as facilitators of the rehabilitation process. In fact, Helen was able to build her beliefs and hopes for improvement upon the knowledge she acquired about GBS.

"...personal factors such as her hopeful and optimistic personality as well as her extensive knowledge about GBS...served as facilitators of the rehabilitation process."

Environmental factors impacted Helen's case as both facilitators as well as barriers. Facilitators included a supportive family and rehabilitation team and her two dogs. Among the barrriers included her pre-rehabilitation home; since this could not be adapted for Helen's needs, it meant that she had to relocate to another flat that was more conducive to her health condition. Another barrier was the lack of insurance that would pay for her special wheelchair.

These contextual factors and other factors that were determined during the assessment phase in Helen's new Rehab-Cycle® were documented in the ICF Assessment Sheet and translated into the corresponding ICF categories that served as the basis for the ICF Categorical Profile.