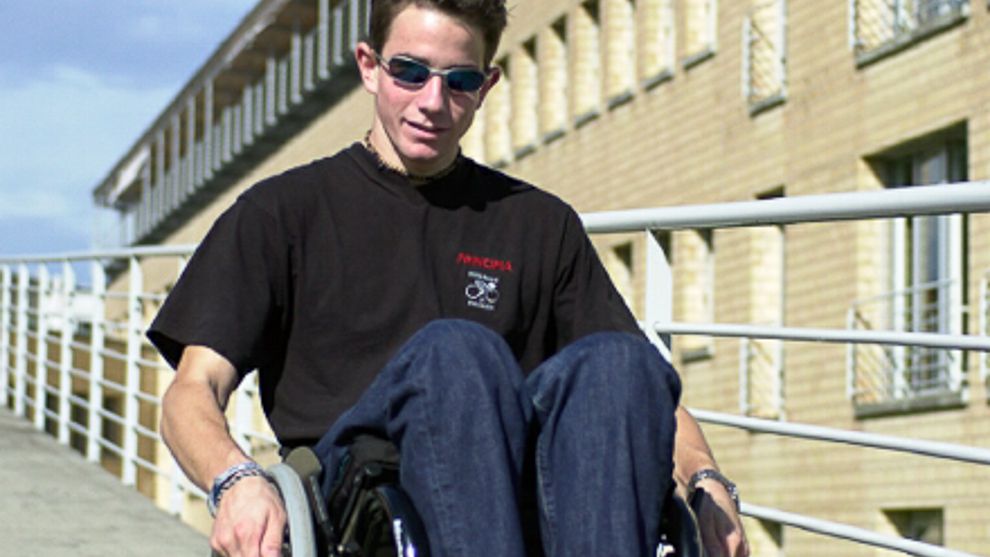 When I think about my situation now, I have this very strong feeling that I simply have to look forward. I'm not the kind of person who has ever had any doubts about myself or what I do. I just accept my new situation and look forward. I won't fall into the trap of self-pity. I absolutely will gain my independence. It's a goal, it's my goal and I will continue to work towards it.

University was at the forefront of Michael’s thoughts as he worked to complete his final weeks of apprenticeship as a cabinet-maker. He had always understood the importance of achieving goals: Finish the apprenticeship, then move on to the next challenge.

At 19, there was plenty of time to explore and focus his mind and energy on longer term prospects. His plans after cabinet-making settled on preparations for the university entrance qualifications. But Michael was not simply career-focused; he had an extensive circle of friends, was in a committed relationship with his girlfriend and had always thrived in his many social activities. He was extremely athletic, enthusiastically diving into all varieties of sports, from climbing to hockey, from running to snowboarding.

It was snowboarding that threw a wrench into his plans. Michael was an experienced snowboarder with years of practice under his belt. As is often the case, it is frequently the more experienced athletes who suffer the most serious injuries. One winter afternoon while snowboarding, Michael slipped on a patch of ice that sent him crashing down an embankment. He tumbled into a streambed below where he lay injured until his friends discovered him a short time later.

Michael’s fall left him with a traumatic spinal cord injury (SCI) (ASIA A at the level of T3) and a broken arm. Emergency vertebral surgery was performed following his admission to the hospital, stabilizing the fracture. His arm was in a cast for six weeks and immobilized; immobilization was important for his rehabilitation. Michael’s impairment was complete, leaving him with no motor or sensory function from mid-trunk down. As a result of his arm cast, rehabilitation in the initial months following the surgery was limited.

The accident left Michael temporarily shaken, but undeterred. Michael knew and felt intrinsically what he needed to accomplish in the face of this life-altering event – his independence.

From the start, Michael really only needed psychological education and information on SCI. In general, he’s a quiet person and very realistic. He seems to accept his condition quite well and also knows what he wants.

Michael’s initial treatment proceeded with no complications. However it was not until his arm had healed three months after the accident that a new Rehab Cycle could begin that focused on his much desired independence. As the process began, Michael was still quite dependent on others to undertake most daily activities such as transferring and washing himself. It was clear to Michael’s rehabilitation team that Michael possessed many personal resources that could be harnessed to achieve his goal of greater independence. His clarity and intrinsic drive were evident in his life prior to the accident – in both his sporting activities and in setting realistic life goals for himself. Considering this major shift in Michael's life and health – from the peak of physical fitness to the challenges of paraplegia – Michael’s resources and attributes would have to be refocused, not diminished.

His long-term goal i.e. to study at university remained on the horizon and facilitated his efforts to regain his independence. The rehabilitation team throughout the rehabilitation process would help support and enhance Michael’s efforts.

"Michael knew and felt intrinsically what he now needed to accomplish in the face of this life-altering event – his independence."