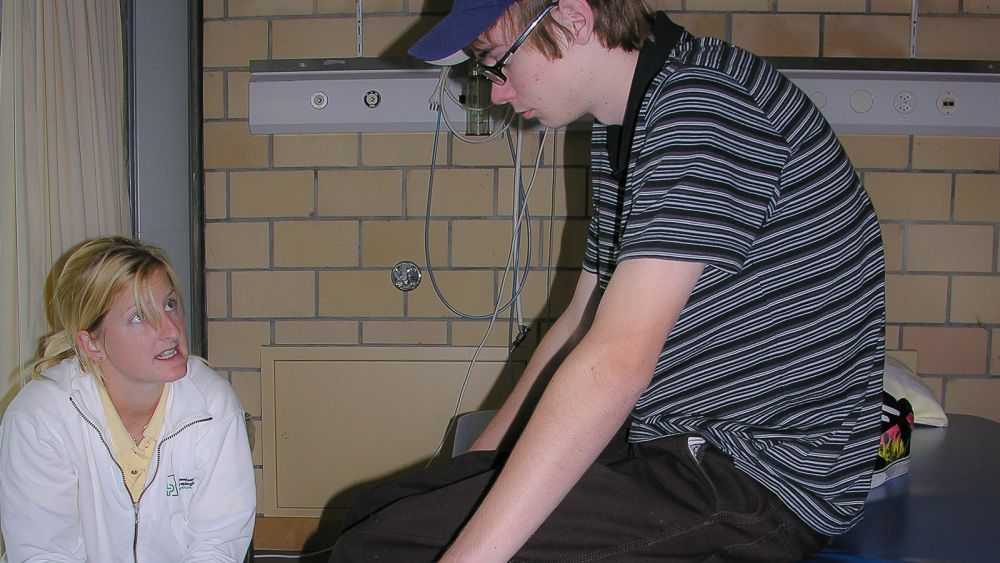 At the start of the Rehab-Cycle® i.e. the assessment phase, Jason's rehabilitation team conducted a comprehensive assessment that involved a battery of discipline-specific evaluations (health professional perspective) and an interview with Jason to capture his perspective about his functioning (patient perspective).

The results of the comprehensive assessment, including the relevant statements Jason made during the face-to-face interview, were documented using the ICF Assessment Sheet, an overview of the assessment results structured according to the components of the International Classification of Functioning, Disability and Health (ICF).16

A Picture of Jason's Functioning According to ICF Components

As a consequence of post-surgery immobilisation in the first few months prior to the start of the Rehab-Cycle®, Jason was unable to be physically active, and he became dependent on others for many aspects of mobility and self-care. The immobilisation limited his ability to change body positions, transfer to and from the wheelchair, as well as care for parts of his lower body and dress independently. The rehabilitation team also found that Jason did not look after his health properly; specifically he did not maintain hospital routines, especially those related to meals. However, Jason was able to care for parts of his upper body, perform toileting activities, and manoeuvre his wheelchair. Furthermore, he was able to stand between the parallel bars and take first steps with some assistance from the therapist.

The limitations Jason experienced in self-care and mobility, including the inability to perform any sports, left him frustrated. Being able to perform sports was important to him.

Sports – handball mostly – was my life up until the accident. I trained intensively, playing matches every week. I don’t care if I’m in a wheelchair; I have to play sports again.

Jason's statements and the results of the rehabilitation team's assessment related to playing sports, mobility and self-care were documented in the section of the ICF Assessment Sheet that reflected the ICF component of activities and participation. In addition to aspects of mobility, sports, and self-care, Jason's ICF Assessment Sheet also identified vocational training as an aspect of activities and participation that was relevant to Jason's rehabilitation.

With respect to the ICF components of body functions and structures, Jason stated that the sensory functions in his legs were unevenly distributed, with hypersensitivity in the right leg compared to the left leg. The physical therapist also observed that Jason was unable to flex his right foot and toes – an important action for walking. Impaired muscle power and endurance, joint mobility, exercise tolerance, control of movement and involuntary movement reactions, as well as sporadic pain in Jason's legs, back and thorax were also revealed after conducting the battery of examinations, tests and observations. Moreover, he often felt tired and unenergetic. Jason attributed the fatigue and lack of energy to the persistent weight loss he was experiencing. He had lost 12 kilograms since his spinal cord injury.

The fatigue Jason experienced, in addition to the slow progress made in regaining functioning, and the continuous comparisons Jason made regarding his functioning level at the time of assessment to his pre-injury functioning, contributed to Jason's feeling of frustration. This in turn led him to disengage from activities that tested his limits.

Factors that may have impacted his functioning (or lack thereof) at the body level and in activities and participation include environmental and personal factors.

Regarding the ICF component of environmental factors, Jason reported both barriers and facilitators. For example, a barrier he faced was his wheelchair inaccessible home. His parental home was located on a hillside and consisted of three stories. An example of a facilitating environmental factor was the support provided by his friends. His friends often and regularly visited him, and assisted him when and where possible. In contrast, Jason's parents were less supportive. His father was at times overly demanding and his mother overprotective. He also felt “patronised” by some members of the rehabilitation team. Moreover, he was sensitive to what he perceived as attitudes of the general public; he sometimes felt observed and judged in public places.

I feel really supported by my friends...I think everybody helps where they can...I’m the youngest person in the clinic. I feel like I’m constantly being mothered, and this really bothers me...

With respect to the ICF component of personal factors, Jason seemed to be accepting of his situation while also hoping to be able to walk and perhaps play sports again. The prospect of regaining the ability to walk and play sports was seen as a personal motive (or a factor of intrinsic motivation). While these personal factors were fundamentally facilitative, it initially seemed that they did not translate into concrete short-term personal goals for Jason, as evident by the discrepancy between Jason's voiced intended goals and his actual performance during therapy sessions.

Role of Motivation in Jason's Rehabilitation

During the assessment phase, the aspect of motivation, as a body function (b1301) as well as a personal factor (personal motives), was assessed as a moderate problem. The psychologist also voiced concerns about Jason's emotional functioning, given his introverted behaviour and the bouts of depressive mood Jason experienced prior to the start of the Rehab-Cycle®. However at that timepoint, the rehabilitation team expected that Jason’s psychological reaction to his situation and surroundings, i.e. depressive mood, ambivalence, frustration, and possible unrealistic desire to fully return to pre-injury status, would gradually evolve to a more active coping process. Although not explicit, Jason's psychological reactions and emotional functioning were seen as related to motivation.

Despite recognising motivation as an underlying aspect to consider in goal-setting, only the personal factor representation of motivation, i.e. as a personal motive, was associated with a rehabilitation goal and defined as a target for intervention in this Rehab-Cycle®. Rather than putting emphasis on motivation as a target for intervention, the rehabilitation team decided to set goals that focused on mobility, participation in sports, and health maintenance, whereby indirectly addressing motivational issues.