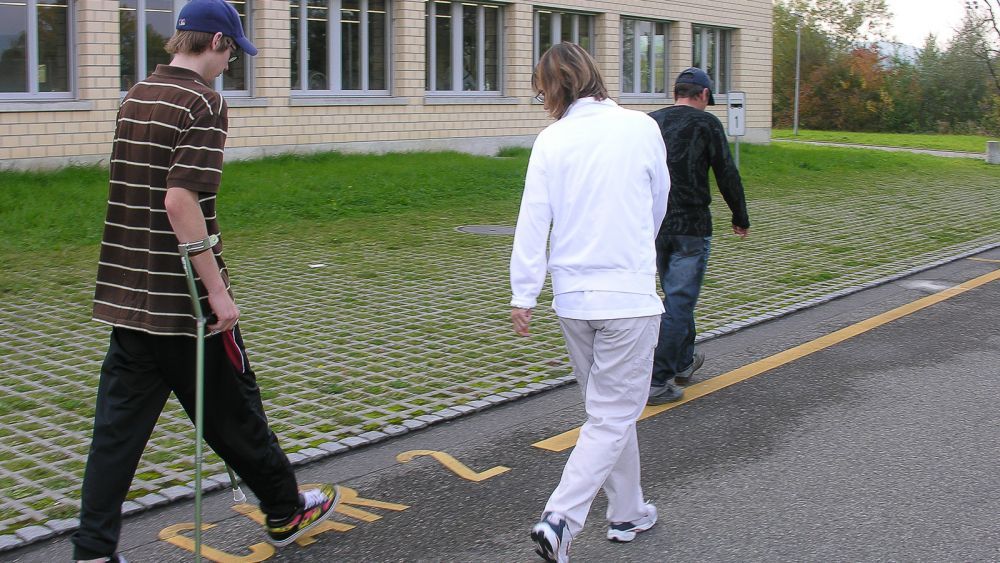 Since the interventions predominately addressed cycle goal 1 ‘re-gaining walking ability’ and cycle goal 2 ‘participation in sports’, the majority of the interventions were performed by either Jason's physical therapist (PT) or sports therapist. Examples of interventions that addressed both cycle goals and were performed by the PT or sports therapist included strength and endurance training, reaction training, and walking training indoors and outdoors. Moreover, in the beginning of the Rehab-Cycle® Jason began playing a number of sports that were deemed appropriate given his capabilities at that point in time, including archery, swimming, and table tennis. Jason also started to play wheelchair basketball. Despite recommendations from the therapists to refrain from playing wheelchair basketball due to the risk of further injury, Jason continued to play.

Also responsible for addressing cycle goals 1 and 2, the physician on the rehabilitation team prescribed medications to reduce the back pain Jason was experiencing.

To address the intervention targets associated with cycle goal 3 ‘health maintenance’, Jason was supported by the whole rehabilitation team. However, the nurse(s) played a special role in helping Jason to care for his body (b810 Protective functions of the skin and d520 Caring for body parts), especially skincare; the nurse(s) provided instruction and regular feedback. Another intervention target associated with cycle goal 3 was b152 Emotional functions, which was addressed through regular counselling sessions with the psychologist.

At the beginning of the intervention phase, some of the rehabilitation team members were surprised by what they perceived as Jason’s lack of motivation to actively participate in his rehabilitation, considering that during the assessment phase Jason stated that he wanted to regain functioning and independence as quickly as possible. This perceived lack of motivation was due to Jason's indifferent or disinterested interactions with rehabilitation team members, manifested by passive listening and a lack of eye contact. Furthermore, when participating in group activities, such as swimming, he would quickly lose interest and required constant attention to complete the activity.

In working with Jason, I realised early on that I wasn’t reaching him. He didn’t really listen to me, always responding with “yeah, yeah”, a typical teenager response. Motivating him was very difficult.

Aimed at improving Jason's motivation the PT tried to highlight Jason's accomplishments where possible and emphasised that the prognosis for improvement in his functioning is good. The PT often pointed out how well Jason was doing compared to other persons with SCI.

In addition, since Jason's passive listening, lack of eye contact, and disinterested responses during interactions with the rehabilitation team were perceived as signs of a lack of motivation, Jason's psychologist implemented techniques to help him improve his communication skills. Moreover, the psychologist provided psychological counselling to explore and strengthen the personal factor that the rehabilitation team defined as Jason's “personal motives”.

About three weeks into the Rehab-Cycle®, the rehabilitation team noticed a dramatic shift in Jason’s attitude toward physical exercise and training and in his health maintenance behaviour. Namely, he began training on his own. Consequently, this extra training led to considerable improvement in his physical functioning. For example, after being allowed to play wheelchair basketball again, Jason trained intensively, quickly reaching the same performance level as the other players. The improvement in Jason's functioning became visible during the re-evaluation of his functioning at the end of the Rehab-Cycle®.