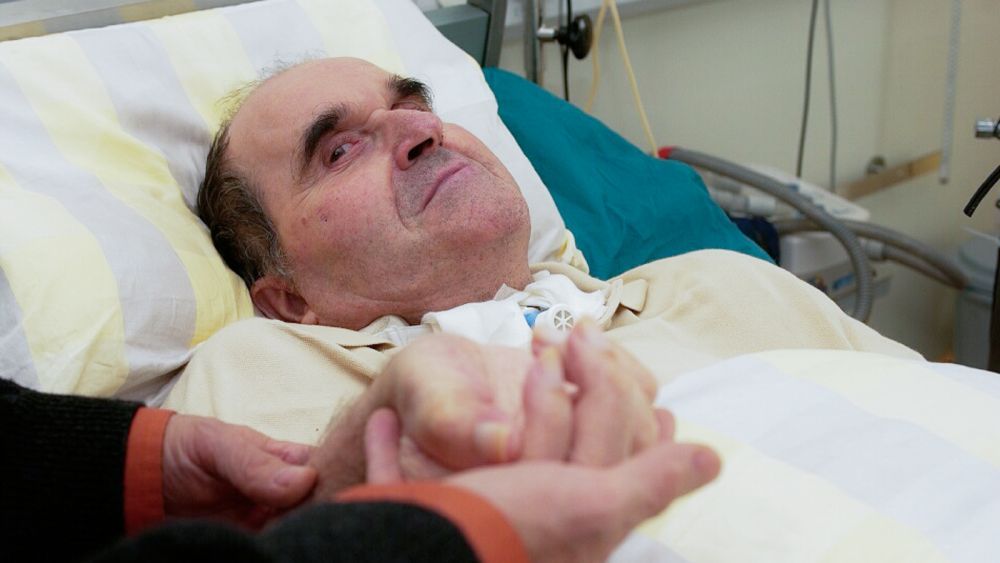 As I was tumbling down the mountainside, I thought to myself, ‘My God, when am I going to stop!’ I was totally conscious the whole time I was falling. When I came to a halt, I was freezing and shaking, and I couldn’t move my arms and legs. I was so very afraid. Like the old cliché goes – I saw my life flash before my eyes. I continue to relive this experience over and over again!

Mr. Seiler, a 65 year-old divorced man with three grown children, continued to be very active even after his retirement. Even after retiring from his long career as a butcher, Mr. Seiler regularly assisted local farmers with various jobs including working the fields. He was also a very active sportsman – skiing, hiking, jogging, and a passionate rock 'n' roll dancer. All of this came to a halt when he experienced a farming accident.

One morning while assisting a local farmer with feeding sheep on a steep mountainside, one of the more spirited sheep rammed Mr. Seiler, immediately knocking him over and sending him down the mountain slope. He fell rapidly, plummeting about ten metres before coming to a stop before more damage was done. However, he was unable to move neither his arms nor legs, and he lay helpless and in shock for some minutes before his fellow farm workers realized what had occurred and ran to his rescue.

First Aid at the Scene

When the other farm workers arrived at the scene, they assessed the situation, and made a critical decision i.e. not to move him and immediately call the rescue service. This was the starting point of Mr. Seiler's rehabilitation journey.

While one of the other farmers carefully descended the slope to stay with and comfort Mr. Seiler, an emergency crew from a regional spinal cord injury (SCI) centre had been dispatched and was on the way to the injury site in a helicopter, the ideal mode of transport for persons suspected of a SCI. The emergency crew arrived within 15 minutes.

After a rapid assessment of the situation and a brief discussion with the farm workers, the emergency crew suspected that Mr. Seiler suffered a hyperflexion trauma. They stabilized Mr. Seiler's cerebral column with a stiff neck brace and the spinal column on a vacuum mattress. Mr. Seiler was carefully evacuated to the SCI centre. During the whole time from the rapid assessment to the transport to the SCI centre, Mr. Seiler's consciousness and cardiopulmonary state were carefully monitored and appropriate pharmacological interventions were undertaken to treat his neurogenic shock.

Mr. Seiler was admitted to the intensive care unit of the SCI centre, where he immediately received acute care and and was evaluated thoroughly by the health care team.

When I arrived in the emergency room I thought ‘This is the end of my life’. I told the doctors that I just wanted to die. I wanted them to kill me – my body wasn’t working anymore…One of the doctors told me that they don’t kill anyone ... and are only there to help me. Somehow, I believed him and it calmed me down. They were all so kind, and that really pulled me through. I felt that they were all doing their best.

Mr. Seiler upon arrival in the emergency room of the SCI centre

Mr. Seiler was found to be oriented (with the highest Glasgow Coma Scale27 score of 15 meaning no problem) and in stable condition. With regards to his neurological status, Mr. Seiler presented with clinical signs and symptoms of an ASIA C sub-C4 tetraplegia, indicating an incomplete SCI with a lesion at the chest/shoulder level with some motor functioning but with sensory functioning problems below the lesion. There was also suspicion of medial medullary syndrome. Following the assessment, he was medically treated with analgesics for pain, prophylactic treatment for ulcers, thrombosis and for bowel management, as well as intensive respiration therapy for breathing functions.

Table 1: Mr. Seiler's ASIA impairment scale score as measured by the health care team at his admission to the SCI centre. This score comprehensively evaluates sensory and motor functions. Sensory functions are graded with 0 = absent, 1 = impaired or 2 = normal. Motor functions are graded from 0 = total paralysis to 5 = active movement with full range of motion, against gravity and provides a level of resistance. In Mr. Seiler’s case, the impairment was below the level of cervical segment 4 (C4) i.e. at the level of the upper chest and shoulder, and given the varying degree of sensory and motor functions, was classified as an incomplete tetraplegia.

While spinal stabilisation surgery was initially considered, based on the extent and type of injury a decision was made to first treat the injury conservatively with a neck brace for three months. After Mr. Seiler’s condition was stabilised, he was admitted to the Intensive Care Unit (ICU).

To his and his health care team’s relief, Mr. Seiler's recovery proceeded quickly and without complications. He wanted to avoid surgery if at all possible, and fortunately, his health care team made the decision to treat the impaired structures conservatively.

Marked increases in neurological recovery were already evident within a few days, particularly in his upper extremities where residual nerve stimulation recovered some degree of power and fine hand function. His forearms showed neuropathological symptoms of paresthesia (or a skin sensation, such as burning, prickling, itching, or tingling, with no apparent physical cause) and dysaesthesia (an abnormal unpleasant sensation felt when touched, caused by damage to peripheral nerves), and increasing neuropathic pain. Medical treatment for these symptoms continued in the ICU as well as in the subsequent rehabilitation unit. In addition, catheterisation was regularly performed as part of bladder management, and respiratory therapy was completed successfully.

Seven days following his accident, Mr. Seiler was discharged to the rehabilitation unit for early post-acute rehabilitation. At the time he was conscious and approachable with normal reactions. All of his vital signs were within normal limits, and his neurological functions were improving steadily. At that point in time, a Rehab-Cycle® was initiated to optimise Mr. Seiler's recovery.

A few days after the accident, I said I wanted to walk. The health team didn’t believe that I could, but I insisted on trying at the very least. My physician agreed, and with the nurses’ help I managed to walk a bit. This was so encouraging – I can’t begin to describe it! An incredible psychological booster!