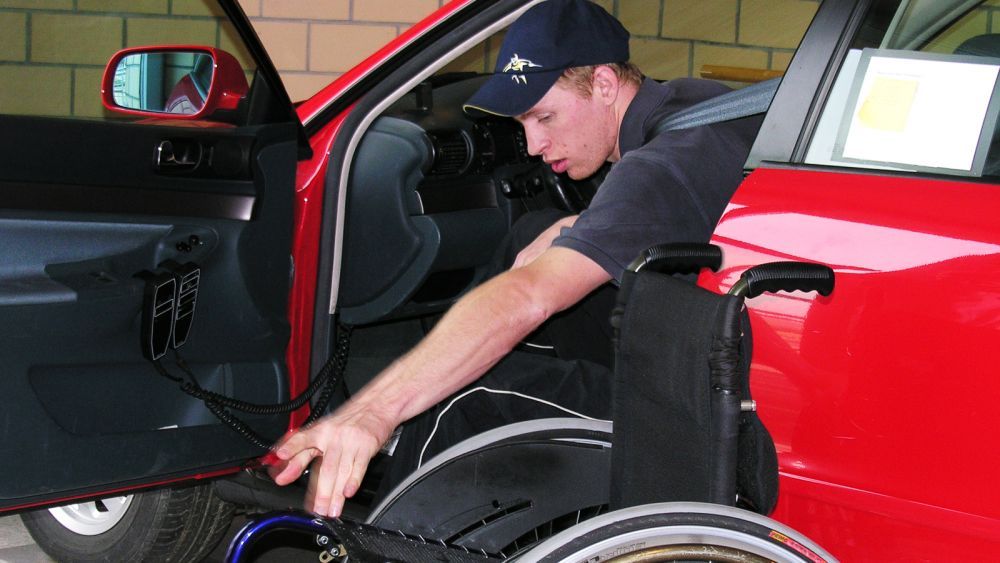 Martin had been a motorcycle enthusiast for most of his young adult life. Despite the risks, he had been both skillful and fortunate in avoiding accidents...until one mid-summer day when Martin was involved in a motorcycle collision. It was a devastating accident that he luckily survived.

This single crash left him with a serious traumatic spinal cord injury (SCI), classified as ASIA A at T7. This meant that Martin had paraplegia with a complete lack of motor and sensory function below the 7th thoracic vertebrae. On the same day of admission to the acute hospital, emergency surgery was performed to stabilise his spine and prevent further damage. Two days later, Martin was discharged to a rehabilitation centre specialising in SCI.

Prior to the accident, Martin had been content with his livelihood and vocational path, having recently completed an apprenticeship as a salesperson for home electronics. However, he soon realised that working as a salesman was not his calling. After finishing the apprenticeship Martin looked for work that was more physical, eventually settling into a job as a mover, an occupation that requires significant strength and endurance.

I finished an apprenticeship to become a salesperson in consumer electronics, but I got bored with it. I needed something different, and found work as a mover. I really enjoyed this…working with different people, the flexibility of the job.

Outside of work, Martin spent his leisure time riding his motorcycle, playing golf and socialising with friends and family. Needless to say, life and livelihood after the injury presented some daunting challenges.

During the initial phase of Martin’s rehabilitation that preceded the start of the current Rehab-Cycle®, the surgical team imposed limitations on Martin’s movement, specifically he was not allowed to rotate nor bend his spine for the first three months following the surgery. These limitations constrained his activities, and consequently his overall rehabilitation progress. Shortly after admission to the rehabilitation centre, Martin’s functioning was evaluated using the spinal cord independence measure (SCIM)21 with a low score of 8 out of 100, meaning that Martin had major difficulties in self-care, respiration, toileting, and mobility. See table 1 Spinal Cord Independence Measure (SCIM) scores.

Table 1: Martin's Spinal Cord Independence Measure (SCIM) scores from the start of rehabilitation to the end of the first Rehab-Cycle®.

Martin is young and energetic, and will need to work at some point. But he’s going to have to find a new occupation. Before, he defined his job by its physical demands. Now we’ve got to look toward what is possible, what is realistic.

I now have to find a new profession. I really see this as a great opportunity. Before the accident, I knew I wouldn’t be working as a mover when I am 65 years old. So I’m going to jump at this opportunity and discover something new.

Martin during one of his vocational rehabilitation counselling sessions

A Three-phase Model of VR

As an important element of the reintegration process, VR provides a person with SCI guidance and a supportive framework for exploring his or her vocational potential and ultimately for finding employment. In Martin’s case a three-phase goal-oriented VR approach was utilised; this approach was developed specifically for the rehabilitation centre in which Martin was a patient. See table 2. The VR approach comprises of:

The activation phase aims to build and strengthen a person’s self-confidence and decision-making skills, taking advantage of both extrinsic motivation (i.e. doing something to get an external reward or avoid punishment) and intrinsic motivation (i.e. doing something because it is personally rewarding). This phase generally begins at about three weeks post-injury with regular VR counselling and an exploration of interests and wishes. Conscious efforts are made to motivate and empower the person to initiate and engage in activities that would lead to work participation, such as participating in a course that draws upon a person’s interests e.g. language or computer course.

The clarification and decision phase can begin when the person is open to discussing his or her vocational future. It is divided into three parts: 1) analysis of the person’s resources, knowledge and skills in different areas and capacity to learn, 2) defining of potential vocational direction and options, and 3) Transfer of knowledge into a plan for the integration phase that defines the career path that the person has chosen to take. The clarification and decision phase sets the stage for the integration phase.

The integration phase begins when a potential job is found or there is a vacancy in a desired educational program. In this phase the VR counsellor serves as a professional mediator, who not only considers the profile and the needs of the person with SCI, but also has an understanding of the demands of the labour market. By establishing a concrete plan with goals in this phase, the person with SCI, together with the VR counsellor, would be able to further elaborate on his or her career path with consideration of the clarifications and decisions made during the previous phase.

Table 2: The elements and possible interventions of a three-phase approach to vocational rehabilitation (VR) counselling. This case study of Martin focuses on the activation phase.

Shortly after Martin’s admission to the rehabilitation centre, a VR counsellor initiated VR based on the three-phase approach, slowly introducing Martin to the aims of VR. Although VR in Martin’s case began one month post-injury, VR may start even earlier depending upon the person's situation, available time and resources.

For Martin, the activation phase was aimed at strengthening Martin's self-confidence and building trust between Martin and the VR counsellor. During this phase it was critical to maintain a balance between the responsibilities of the VR counsellor and that of Martin in the return-to-work process. It was essential that Martin kept a sense of self-responsibility and independence. The activation phase involved Martin's participation in a number of continuing education courses offered by the rehabilitation centre. Although Martin was determined to move forward with his VR, he was initially unsure about the direction to take. Martin was advised to take a general computer course. After some discussion Martin and his VR counsellor decided that, given Martin's limited typing skills, he should first take a typing course. The process of deciding on the specific courses helped to enhance Martin’s decision-making skills.

One challenge that Martin faced in participating in the typing course was his difficulty in maintaining a sitting position for an extended length of time. This resulted in a slow start. However, over the course of one month, he gradually and steadily improved. In the end, Martin was able, albeit slowly, to type with ten fingers.

Two months post-injury and after starting VR, the assessment phase of the current Rehab-Cycle® began.