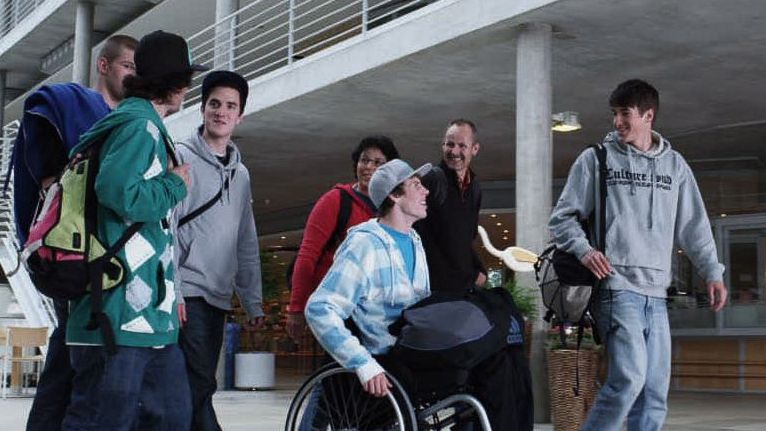 As an enthusiastic freestyle snowboarder 18 year old Ben regularly participated in international competitions. It was during an European championship that he incurred a spinal cord injury (SCI) as a result of a snowboard accident.

At the time of the accident Ben had been living with his parents and his younger brother in a house near the Swiss capitol city of Berne and was in the second year of his apprenticeship as a carpenter. He had a girlfriend and a huge circle of friends. Ben loves outdoor activities, especially sports activities.

Ben received his first treatment for the injury, including spinal surgery, in one of the biggest non-university hospitals in Switzerland. One day later he was transferred to a rehabilitation centre specialising in SCI.

Ben’s SCI was graded with an American Spinal Injury Association (ASIA) Impairment Scale grade A with a lesion in the spinal cord segment below the twelfth thoracic vertebrae (T12), meaning that he had no sensory or motor functioning below the waist. Furthermore, he suffered from post-traumatic stress disorder, urinary tract infections and neuropathic pain – all of which were able to be treated successfully.

In addition to the interventions that addressed Ben’s impairments and in optimising completion of activities of daily living, a number of issues related to participation and community reintegration had to be addressed during rehabilitation. One issue was related to Ben’s work reintegration. As a result of his accident he had to quit his apprenticeship as a carpenter and find another occupation. Independent mobility, specifically using public transport and driving a car, was another crucial issue that Ben and his rehabilitation team had to tackle. Moreover, being able to move around in his home was essential to successful community reintegration and independent living.

Critical to addressing these issues was not only acquiring the insurance coverage for the provision of services at the rehabilitation centre, but also the clarification of cost coverage for possible education and training as part of Ben’s vocational re-orientation, for interventions toward getting a special driving license and an adapted car, for mobility-related assistive devices, and for required modifications to his home. Furthermore, clarification about getting public transport passes for persons with disability was necessary. Since the legal framework applicable to Ben’s case and the social security system in Switzerland played a fundamental role in these clarifications as well as for his future as a person living with SCI in the community, it was important that Ben became aware of the relevant laws and regulations and his rights as a person with disability.

At beginning of rehabilitation, Ben’s knowledge about his rights and eligibility for various services and financial support was very limited.

One learns the theory about the social security system at school, but the real need to understand how the system works only becomes important when you have to rely on it. As a lay person it is almost impossible to have a clear overview about all existing laws and regulations and related policies.

After five months of initial rehabilitation during which Ben showed major functioning improvement, he and his rehabilitation began to plan his discharge from the rehabilitation centre, and a new Rehab-Cycle® started. To help address some unresolved issues related to his integration into the community and to empower Ben to gain knowledge and exercise his rights, members of the rehabilitation team, especially the social worker, the occupational therapist and the vocational counsellor, supported Ben with practical advice about managing insurance and social security mechanisms.

Rights For Persons With Disability