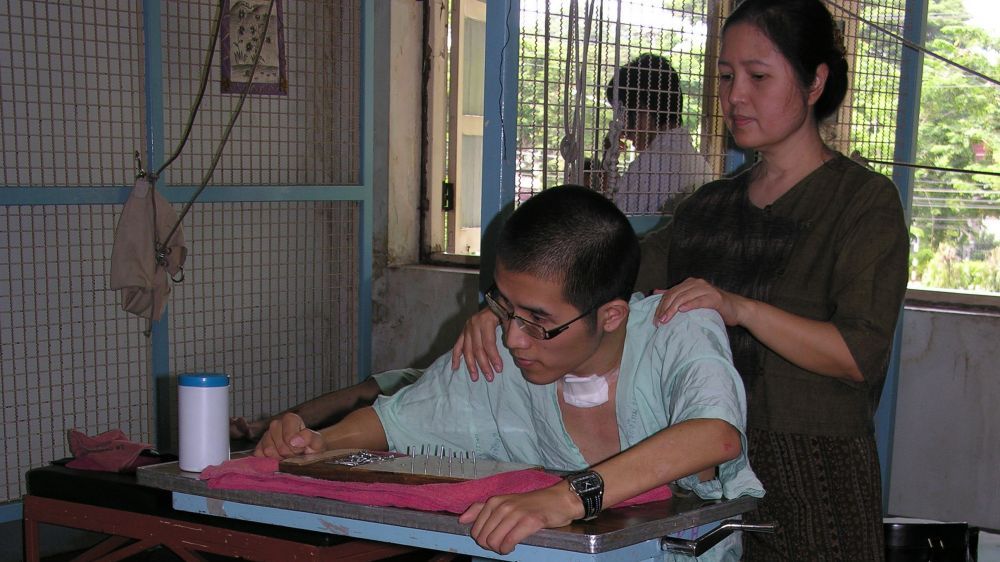 To enable appropriate planning of Mr. Wun's second period of rehabilitation, the rehabilitation team had to gain an accurate picture of his functioning.

Mr. Wun’s assessment revealed a list of problems, predominately in body functions and structures, that led to a range of ongoing or potential secondary complications:

Many of these body function problems exacerbated Mr. Wun's mobility difficulties i.e. in transferring, moving around in the wheelchair, and changing basic body positions as well as in self-care e.g. washing himself and toileting.

I need assistance to get into and out of the wheelchair...I can't go to the toilet.

Particularly difficult for Mr. Wun to deal with are the limitations related to food and eating, since he loved cooking and eating. While dysphagia continued to severely limit his ability to swallow food and eat, Mr. Wun's use of a U-cuff, an assistive device worn on the hand to hold items such a fork or spoon, helped to compensate for the paralysis in his hands.

"In the first year after his accident Mr. Wun was completely excluded from community life, because the lack of accessibility in the community prevented him from leaving the confines of his home and property."

Mr. Wun also experienced some environmental factors as barriers to optimal functioning and to being fully integrated in the community. Among the most significant is the lack of accessibility in the community. This impacted not only his mobility, but also his ability to maintain friendships, work and participate in community life. For example, in the first year after his accident Mr. Wun was completely excluded from community life, because the lack of accessibility in the community prevented him from leaving the confines of his home and property. While the use of the internet and telephone allowed him some degree of connectivity with people outside of his home, this was less than ideal.

[My friends and I] still talk over the internet and by phone, but I can’t go out with them anymore. This is annoying sometimes. My friends are in Bangkok, and they come only twice a year.

The environmental barriers in the community, especially inaccessible modes of transportation, in addition to his mobility problems also restricted his ability to work outside of the home. He was, however, able to work from home using his computer to do translations for his former employer.

Despite continued problems in functioning and barriers to fully participating in social and community life, Mr. Wun seemed to accept his situation. This was among several personal factors that supported Mr. Wun in finding ways to live as fully as possible in light of his spinal cord injury. In addition to being able to cope with his situation, he was unconcerned about how others perceived him. Furthermore, the fact that he earned an engineering degree from an Australian university assumedly facilitated the arrangements he made with his former employer regarding the translation work.

With a more comprehensive picture of Mr. Wun's functioning and the different factors that could support or hinder his rehabilitation, Mr. Wun and the rehabilitation team proceeded to the next step in the Rehab-Cycle® assessment phase i.e. goal-setting and determination of intervention targets.