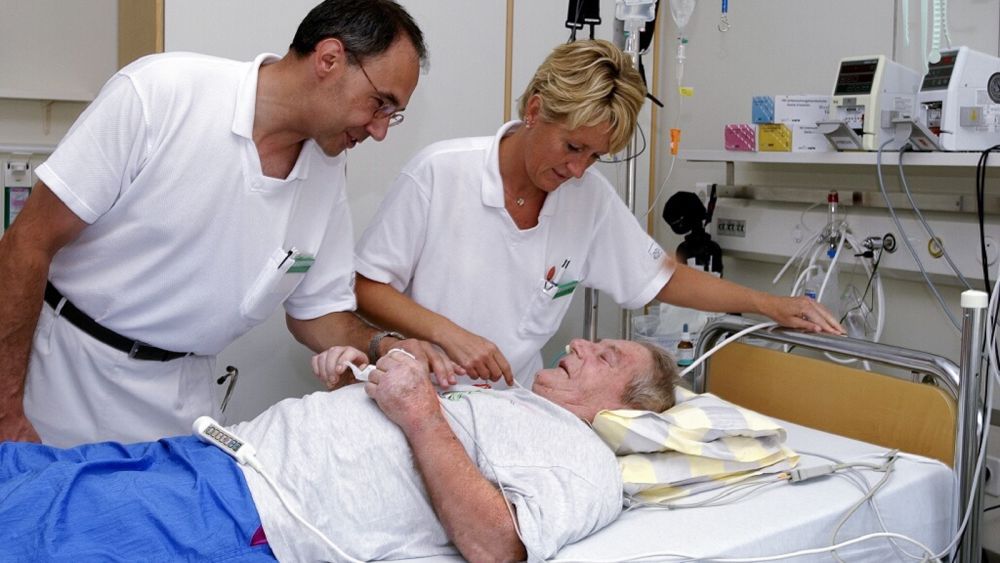 I felt relatively healthy before the aneurysm and the spinal cord injury. I didn’t have any sense of a problem that would require an operation, so I was quite surprised when it came up. There was no discomfort; I wasn’t disabled. I did get a little tired while working. Of course, I thought this was just my age.

By many measures Mr. Meier, 78 years old, was successful in his life. After 25 productive years as the chief executive officer (CEO) of his own auto parts firm, he went into retirement. He was married only once and is still married, and is an involved grandparent of two grandchildren from two daughters.

Retirement did not mean that Mr. Meier would slow down. And he certainly was not going to stop "working". Since retiring, he had been focused on managing and maintaining a number of properties that he owns throughout Switzerland. Not surprisingly, Mr. Meier lived comfortably and in relative wealth together with his wife in a one-family chalet. He had always lived his life enthusiastically, and since stepping down as CEO, sailing, gardening and socialising have comprised his recreational time.

At his age, Mr. Meier never anticipated having to live with a spinal cord injury (SCI). And despite his age and living with diverse health conditions at the time of onset of the SCI, physical fitness, mental clarity and independence were the norm for him. His life after SCI was drastically different, taking him on a five-month rehabilitation journey with challenges that he had not previously experienced.

Mr. Meier’s medical history extended back quite a number of years, covering a range of health problems, some of which had implications for his recovery after the SCI and subsequent rehabilitation.

"...previous aneurysms, heart disease and thromboembolytic incidents placed him at even greater risk for SCI-associated thromboses."

In 1998, he had suffered from thoracic and abdominal aortic aneurysms that were successfully treated. Mr. Meier's medical history also included ischaemic coronory heart disease and repeated thromboembolic incidents (1942, 1963 and 1998), renal cysts, cox arthrosis (leading to a hip joint prosthesis in 1998) and wrist and shoulder arthrosis. Despite his extensive history of illness, Mr. Meier considered himself quite fit for his age – that is, before his SCI.

Although none of these health conditions resulted in a permanent disability at the time of their onset, all of these conditions had the potential for negatively impacting Mr. Meier’s recovery from SCI. For example, previous aortic aneurysms (see box 2), heart disease and thromboembolytic incidents placed him at even greater risk for SCI-associated thromboses. Moreover, heart disease could impact his tolerance for exercise, that in turn could limit rehabilitation interventions.

An aneurysm occurs when there is a localized dilation (or widening) of an artery. Such a widening can lead to a weakening or rupture of a vessel wall. Most aneurysms occur in the aorta. The aorta is the primary vessel that distributes blood from the heart to the rest of the body. While smaller aneurysms may be treated medically, some larger or more aggressive aortic aneurysms may require a surgical intervention to repair the damaged tissue. This procedure involves replacing the damaged portion of the vessel with a synthetic tube.151617

SCI can be one of the most serious consequences following the surgical repair after an aortic aneurysm. Its onset can also be one of the most difficult to predict. The life-saving procedure carries with it the devastating risk of paraplegia. With older age, post-operative SCI has been associated with poorer outcomes due to secondary complications. The reasons for SCI stem from factors associated with the surgical procedure itself that involves the clamping of the aorta and the disruption of blood flow to the spinal cord. Although techniques have been devised to minimize the risk, SCI still occurs in 3-18 % (estimate) of the cases.18

Based upon the the risks, benefits and treatment options available, health care professionals together with the person who experienced the aortic aneurysm will need to make an informed decision about the most appropriate intervention.

In 2007, Mr. Meier underwent his second surgical repair following an aortic aneurysm. Though the procedure likely saved his life, he was now confronted with paraplegia as a result of the intervention. His primary diagnosis was classified as ASIA B, sub T4 (indicating that sensory but no motor function existed below the injury level).

Following the onset of SCI, a number of secondary complications arose in the early post-acute rehabilitation phase. A direct result of the SCI included autonomic dysregulation that caused an impairment of Mr. Meier's circulation and bladder, bowel and sexual functions. One week after the procedure, Mr. Meier was further diagnosed with respiratory global insufficiency, and a tracheostomy tube was put in place to allow for mechanical ventilation as well as a tube to facilitate feeding (known as a PEG tube that passes directly into the stomach).

"Whether and to what degree the complications that arose were related to Mr. Meier's age is impossible to discern."

Whether and to what degree the complications that arose were related to Mr. Meier’s age is impossible to discern. However, being elderly clearly put him at risk for many of the conditions previously mentioned in addition to the aneurysm itself.

These complications that showed up within 10 days after surgery were managed with medical interventions. Mr. Meier was subsequently admitted to a a rehabilitation centre specialised in SCI. At admission, his spinal cord independence measure (SCIM) score was low at 9 out of 100 points.

The spinal cord independence measure, or SCIM, is a disability scale commonly utilized to perform functional assessments of persons with paraplegia or tetraplegia. It was developed to provide health care professionals with a valid and reliable measure that specifically addresses the ability of persons with SCI to perform basic activities of daily living independently. The measure has been determined to be sensitive at detecting changes in functioning of persons with a spinal cord lesion. The following areas of functioning are evaluated to determine a SCIM score that goes from 0 to a maximum of 100 points:

The higher the score the more independent a person is. The SCIM score can be useful for a multidisciplinary team to assess everyday performance over time.

In Mr. Meier’s case, his SCIM score was low but stable just prior to the start of his rehabilitation. This reflected his significant degree of dependancy four weeks following the SCI. His respiration continued to be artificially assisted with mechanical ventilation, and feeding was only possible through his PEG tube.

Medical management and rehabilitation proceeded steadily over the course of four months. During this time, his respiration improved and he was eventually able to breathe without the help of a respirator. Unfortunately the tracheostomy tube resulted in decreased sensitivity of Mr. Meier's pharynx and larynx, that in turn later led to aspiration pneumonia. Luckily, the pneumonia was successfully treated. However, Mr. Meier continued to suffer from aspiration problems due to difficulties in swallowing (known as dysphagia).