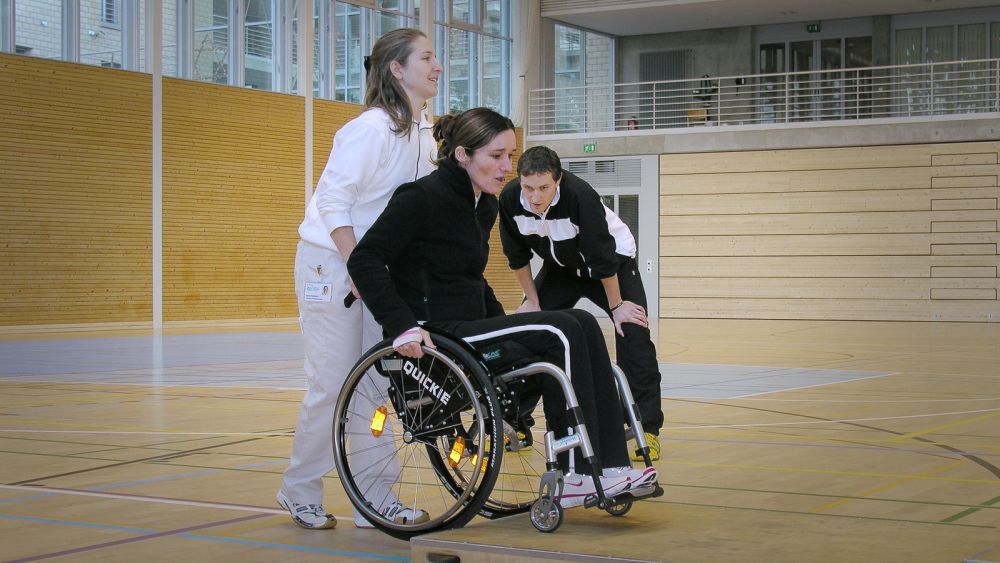 During the initial assessment phase of the Rehab-Cycle®, both Lisa and members of her rehabilitation team provided insight into Lisa's functioning in terms of body functions and structures, activities and participation, and environmental and personal factors.

Lisa felt that while she had made some progress in the first four months of rehabilitation prior to this Rehab-Cycle®, there was still much to be improved. Medically, she had many of the typical impairments associated with a spinal cord injury (SCI) at her level of injury. Pain, reduced muscle power in the upper extremity, reduced exercise tolerance, unstable blood pressure, and a moderate degree of spasticity were body functions that needed to be addressed in this Rehab-Cycle®.

Moreover, Lisa found it straining that she continually toppled over when sitting. At the time of assessment her ability to maintain a sitting position was limited. In addition, performing activities of daily living such as dressing and transferring herself from bed to wheelchair sometimes exhausted her. Lisa was still completely dependent on others for emptying her bowels, and needed partial assistance for dressing, washing and transferring. Nevertheless, there were things Lisa was able to do. For example, she was able to transfer from her wheelchair into a car, manage her bladder and care for her skin.

Although Lisa saw herself as emotionally stable, her fear of falling, though improved, remained an issue. Her fear of falling precipitated the limitations she experienced in physical activities. The rehabilitation team defined Lisa's fear of falling as an “impaired emotional function” resulting from the accident. Despite this view, the result of Lisa's neuro-psychological assessment was normal for her condition (given the traumatic brain injury she incurred during the fall).

"Although Lisa saw herself as emotionally stable, her fear of falling, though improved, remained an issue."

In terms of participating in major life areas such as working and maintaining a social life, Lisa’s SCI altered the life she had led up until the climbing accident. The possibility of returning to her pre-injury job as a sports and geography teacher had to be clarified. With particular skill and enthusiasm in sports, returning to her profession was one of Lisa's aims. During this initial assessment, Lisa's rehabilitation team noted that her involvement in sports up to this time in the rehabilitation process had been less than expected for a former athlete, and that it was time to address this shortcoming in the rehabilitation process.

Lisa had an engaged social and family network. She felt that the relationship with her boyfriend had intensified after the accident. He made an effort to support and meet Lisa's needs. In addition, she often saw her family and received many visits from friends – although at times she felt that the visits were perhaps too frequent.

At the time of the accident, Lisa had been living with her boyfriend in an apartment that was not completely wheelchair accessible. This meant that the apartment would require some adaptations if they decided to remain there. This and other environmental factors, such as an optimal wheelchair and adaptations to her car, had to be addressed before Lisa's discharge.

With regard to relevant personal factors, Lisa possessed important personal traits that fostered her participation in sports, namely a high level of body awareness and intrinsic motivation.

The input provided by Lisa and her rehabilitation team was documented in the ICF Assessment Sheet, a listing of statements made by Lisa (in the section entitled "patient perspective") and a summary of the results of the assessment completed by the rehabilitation team (in the section entitled "health professional perspective"). It also lists relevant environmental and personal factors. See table 2.