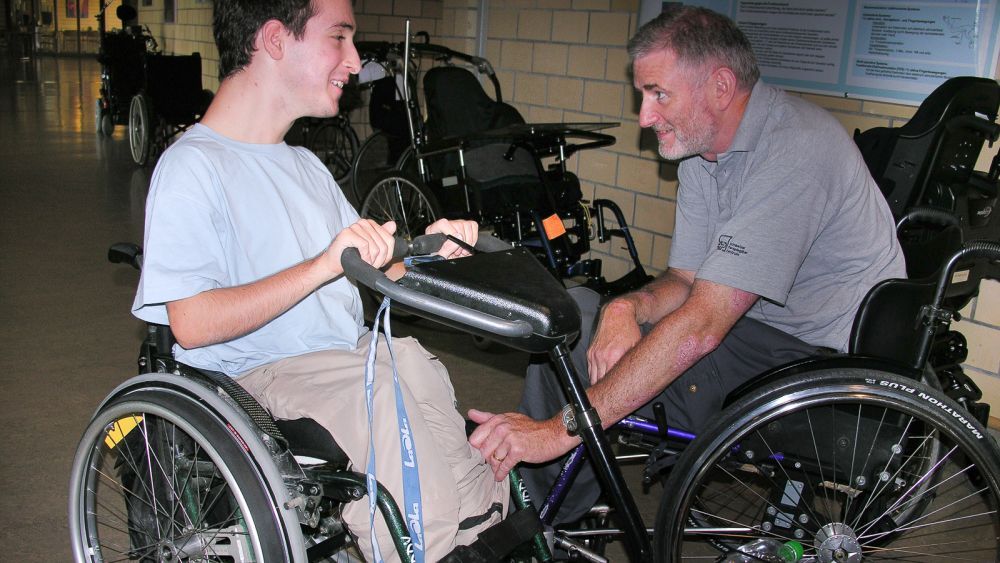 Shortly before Stefan's three-week rehabilitation programme ended, a final assessment took place to see whether the goals Stefan and the rehabilitation team set at the beginning of the programme were achieved.

Overall, Stefan made significant progress towards gaining independence in his daily routine. Although he only met the cycle goal of improved mobility, there was still some improvement in the area of self-care. Stefan's progress in the intervention targets was documented using the ICF Evaluation Display, an extended version of the ICF Categorical Profile that visually shows (as a bar graph) the rating given to each of Stefan's intervention targets during the final assessment as well as from the initial assessment. Note that a comparison of the initial and final ratings only shows that there was a change, but not whether the change was due to the interventions. The ICF Evaluation Display also indicates whether the goals set were achieved or not. See table 4.

Table 4: ICF Evaluation Display; ICF Qualifier: rate the extent of problems (0 = no problem to 4 = complete problem) in the components of body functions (b), body structures (s), activities and participation (d) and the extent of positive (+) or negative impact of environmental (e) and personal factors (pf); Goal relation: 1 and 2 refer to Cycle Goal 1 and 2; SP refers to the Service-Program Goal; Goal value refers to the ICF qualifier to achieve after an intervention. Goal achievement: + means achieved, - means not achieved.

Cycle goal 1 ‘improved mobility’ was crucial to Stefan's overall independence in daily routine and specifically in order to participate in the one-year vocational preparatory course he had been planning to take upon finishing school.

At the end of the rehabilitation programme, Stefan was able to transfer himself (d420) from the bed to his wheelchair with supervision or with only minimal assistance. While other transfers required more support, he improved his transferring skills as a whole. He also improved his ability to maintain a sitting position (d4153). However, due to his fear of falling backwards Stefan leaned on his left hand for support. Nevertheless, the rehabilitation team considered the goal they set for maintaining a sitting position as achieved.

Unfortunately, using the train remained a challenge. Stefan was still unable to use the elevators at train stations, since he was still too slow in moving into the elevator before the doors closed. In addition, he continued to take a considerable amount of time to undock and re-dock the Swiss-TracTM. As a result, Stefan blocked the train’s door, preventing the train from departing. Thus, the goal of using public transportation independently (d470) was not achieved.

Other mobility-related goals that were not achieved included improving mobility of the right elbow (b710), increasing muscle power in the arms (b730), and changing basic body positions (d410). In addition, spasticity (b735) remained a problem.

Although cycle goal 2 ‘increased independence in self-care’ was not achieved, Stefan took less time to care for body parts than at the beginning of the rehabilitation programme. Nevertheless, Stefan required help from others to care for his body parts (d520). Shaving remained a time-intensive task. However, the rehabilitation team felt that Stefan would become more efficient in shaving with additional practice.

At the end of the rehabilitation programme, Stefan was able to dress himself (d540) independently despite taking an average of 30 minutes to finish dressing.

Unfortunately no significant improvements were made in Stefan’s ability to look after his health. Forecasting that Stefan would continue to need support in performing self-care activities at home, the rehabilitation team involved Stefan's mother in a therapy session to help her optimise the support she gives Stefan in these activities.

The goals related to maximising the assistive products and technology for everyday use (e1151) and for mobility (e1201) were both achieved.

In terms of personal factors, the psychologist recognised the complexity of Stefan’s strategies for dealing with daily challenges and his life in general. On one hand, Stefan described himself to others as “dependent and lazy”; the psychologist saw this more as a strategy to maintain the status quo of dependency. On the other hand, Stefan possessed a personality trait that is goal-oriented and driven, as evident by his intention of attending a one-year vocational preparatory course far from home as well as his mastery of playing the panpipe.

He says that he is dependent and lazy. But he hides behind this.

While Stefan's personal factor goal of increasing his self-assurance was achieved, his goal of becoming more assertive was not.