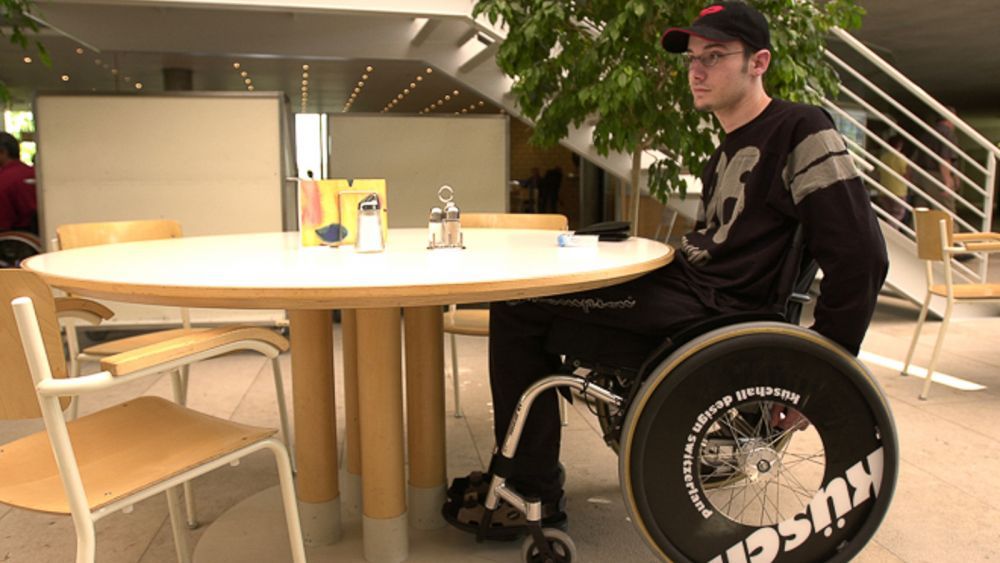 Peter was a 20-year-old plasterer at the time of his car accident in 2001. He is diagnosed with tetraplegia (sub C6, as a consequence of vertebral fracture of C5) ASIA B.

The thing that bothers me most about my situation is depending on others so much. I cannot stand having to wait until the nurse arrives in the morning to get me out of bed. The days that I wake up early are terrible. My inanimate body forces me to lie there! These are the moments in which you realise most how much you are at the mercy of others. I do not like to be dressed and washed. You feel almost like a baby. During the day it is OK. I can handle almost everything I want to do. Something else that bothers me is having to organise ahead of time when I go to bed or having to ask one of my friends for help… But that’s nothing compared to not being able to decide when I want to get up. I hope that something can still be fixed to change this.

In 2004, Peter and his medical team decided that upper extremity surgery for his left arm and hand (he is left-handed) would improve his arm-hand function, lower his dependence and lead to improvements in his quality of life. This procedure was performed successfully, and following a period of rehabilitation without complications, Peter’s ability to do many day-to-day activities improved and his independence increased.

"These are the moments in which you realise most how much you are at the mercy of others."

It definitely made some things much easier, like eating and drinking. But also other things I enjoy, like driving to meet friends. I could more easily transfer myself in and out of the car; and also playing video games. These things were really much easier after this surgery, much less difficult. Although it’s not like I need less help. The nurses still have to come and do all the things I can’t do by myself. Certain things have just become a little less hard for me to do…and because of this, I started enjoying life more. And when you’re stuck in a wheelchair, these small improvements make a big difference. I would even be able to work in a call centre if I wanted to. But you know, I’m not so excited about that. I’d rather just meet friends and play games … so we’ll see…

"...certain things have just become a little less hard for me to do...and because of this, I started enjoying life more."

With much improvement in his left arm-hand function, Peter made the decision to have another operation on his right arm and hand. He wanted to become more independent, particularly in self-care, by improving his ability to use his hand and arm while transferring. In December 2006, he went for upper extremity surgery for his right arm. This procedure was again completed successfully and was followed with standardised, post-operative medical management by his rehabilitation team. This program meant that he was fitted with a wrist brace and arm cast, and began physical and occupational therapy exercises. See table 2.

"He was fitted with a wrist brace and arm cast and began physical and occupational therapy."

Additionally, due to restrictions imposed by his surgeon, Peter was not allowed to use his hand and arm, forcing him to use an electric wheelchair. Over the subsequent three weeks, no obvious problems arose, and Peter was able to easily accomplish the physical exercises prescribed for him.

However after three weeks, a change in Peter’s behaviour was noticed – Peter became increasingly rebellious and difficult. He began to miss therapy sessions without explanation, dismissing his responsiblities as a patient without concern. He began to drink and smoke more often with other patients late at night, with the consequence that he was tired during the day. He also disregarded rehabilitation centre rules. In contrast to this defiant behaviour, Peter made inquiries into the possibility of going home and visit with friends over the weekend. These mixed signals caught the attention of the rehabilitation team.

Four weeks following the surgery, we met to discuss Peter's evolution. We immediately focused on his behaviour and the challenges it presented to his rehabilitation. We all agreed that Peter's wish for weekend leaves were unrealistic...He could not drive and most importantly, a weekend leave would possibly compromise the advances already made in the rehabilitative process.

"A change in Peter's behaviour was noticed – Peter became increasingly rebellious and difficult."

In addition, given his behaviour, all of us were concerned that he would not continue with his treatment plan at home without supervision...All of us agreed that a shift in Peter's behaviour would be necessary for the best rehabilitative outcomes. We also realised that we should also learn more about how Peter sees the situation. His change in behaviour had to have an explanation...The psychologist pointed out that we had eventually underestimated how important common goal-setting is, even in a case in which routine surgery is performed. Agreement on targets between Peter and us might result in increased intrinsic motivation and his own sense of responsibility toward the rehabilitation programme.

"... a weekend leave would possibly compromise the advances already made in the rehabilitative process."