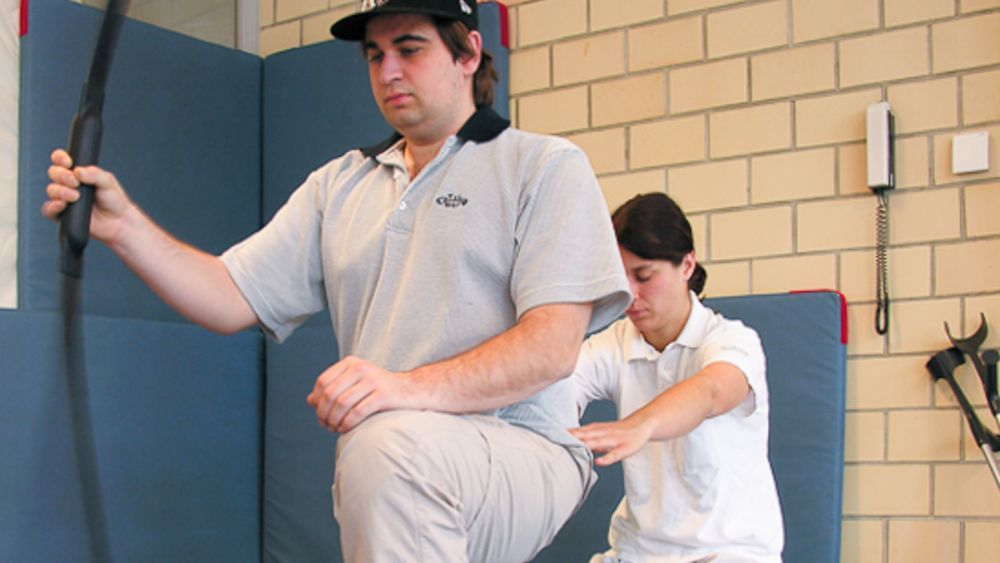 In addition to the regular members of the rehabilitation team, other health professionals were also involved in Marco's rehabilitation. For example, an ophthalmologist from a specialised eye clinic was called in to conduct regular checks on Marco's vision and to consult regarding medication.

To meet Marco's cycle goal 1 ‘independence in mobility’, Marco and his rehabilitation implemented a variety of interventions. For example, a dietician assisted Marco in reducing and maintaining his weight. Marco's weight gain since beginning steroid treatment hindered his mobility. Thus, losing weight was seen as essential for increasing independence in mobility. Other interventions to meet cycle goal 1 included hippotherapy to reduce spasticity (b735 Muscle tone functions), and body balance training, gait training, and use of the locomat to improve b770 Gait pattern functions. Gait training, use of the locomat, and specific walking training were employed to improve Marco's ability to walk short distances and walking in general. Although the majority of the mobility-related interventions were conducted by the physical therapist and the sports therapist, some mobility-related interventions were also provided by the occupational therapist e.g. wheelchair technique training, city training and outdoor training to improve d4602 Moving around outside the home and other buildings.

To improve intervention targets related to toileting – Marco's cycle goal 2 – the physician was responsible, among other things, for the urological examinations, conducting tests to monitor progress and detect potential secondary conditions as soon as possible, prescribing and adjusting the medication, including suppositories, to alleviate the symptoms of bowel and bladder dysfunction as well as for deciding on modes of catheterisation. The nurse focused on bowel and bladder management, for example, in instructing Marco on the use of the condom catheter to give him more control and freedom in emptying his bladder, using his fingers to manually evacuate stool, and on colon massage techniques to facilitate bowel movements. Moreover, the nurse was responsible for teaching Marco optimal hygiene.

When they showed me how to use my fingers remove my stool, I thought, “I don’t want to do this, I can’t.” It was really hard to accept. It’s still unpleasant, but I have to do it anyway...Defecating is really tiring and unpleasant, and can take a very long time, especially when I use suppositories to empty the whole bowel. In the beginning I couldn't feel anything at all and couldn’t tell when I needed to go or when I was finished. Using suppositories every second day at least gave me the possibility to plan ahead.

Marco used a condom catheter until problems increasingly occurred when trying to dislodge the condom catheter. These problems resulted from increased bladder pressure due to detrusor hyperactivity, i.e. uncontrolled bladder contractions.1 Marco decided against the option of paralysation (with Botox) plus catheterisation due to the pain caused by the insertion of the catheter into the urethra. Eventually Marco and his rehabilitation team chose the surgical option – placing a stent in the urethra to provide internal support to allow urination to occur more freely by holding the external sphincter open.

To help address cycle goal 4 ‘clarification of a new occupation’, vocational counselling was offered to explore possibilities for a new career.

"A number of other interventions were provided to turn existing contextual factors into facilitators."

A number of other interventions were provided to turn existing contextual factors into facilitators. For example, psychological counselling, Feldenkrais therapy and music therapy were all provided to help Marco develop more effective coping strategies, as well as funnel his personal resources to deal with his emotions toward his health condition better. Furthermore, Marco's family participated in education and counselling sessions directed at expanding their and Marco's knowledge about his health condition.