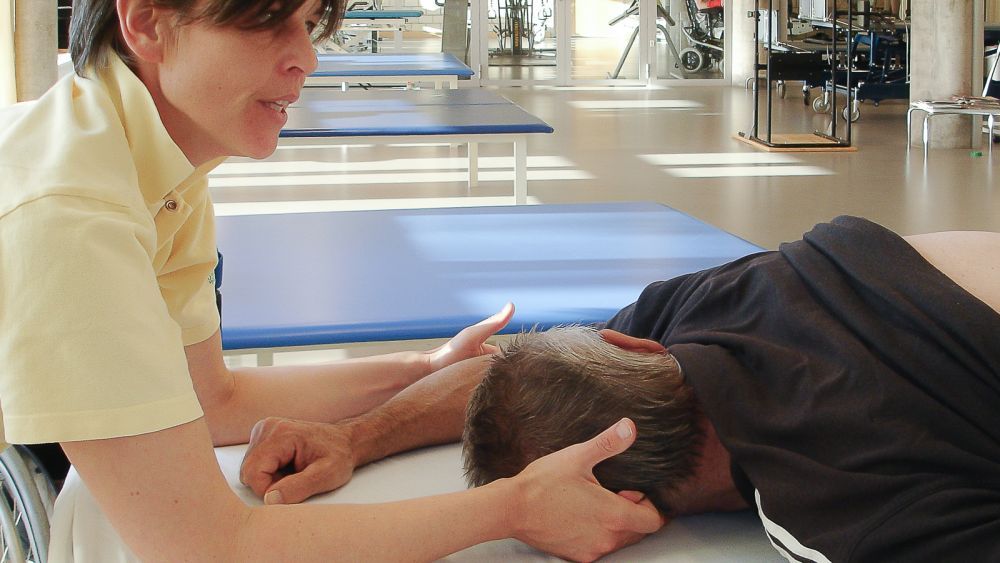 While the social worker was responsible primarily for addressing Conrad's global goal, the other members of Conrad's rehabilitation team provided interventions that targeted the service-program goal, the three cycle goals, and the respective intervention targets.

While the majority of the intervention targets was addressed by one member of the rehabilitation team, the responsibility for selected intervention targets was shared by several team members. For example, for cycle goal 1 ‘improvement in mobility’ the physical therapist provided thermotherapy and movement therapy to help alleviate Conrad's experience of pain in his back (b28013), in the upper (b28014) and lower (b28015) limbs, and in the joints (b28016), while both the physical therapist and the occupational therapist provided wheelchair training to improve Conrad's ability to manoeuvre his wheelchair and other mobility devices (d465).

"The occupational therapist coordinated with the social worker, who was responsible for clarifying the financial coverage for the devices and equipment."

As shown on the ICF Intervention Table, Conrad’s cycle goal 1 was addressed with interventions provided predominately by the nurse, sports therapist, and physical therapist. The occupational therapist did, however, take on a counselling and coordinative role with regard to deciding on appropriate assistive devices and equipment for indoor and outdoor mobility (e1201), as well as for ordering and adapting the assistive devices and equipment. The occupational therapist coordinated with the social worker, who was responsible for clarifying the financial coverage for the devices and equipment. For example, funding was acquired from a charitable foundation to pay for a specially ordered high-power Swiss-TracTM to accommodate for the mountainous location of Conrad's home.

With regard to the interventions to address cycle goal 2 ‘improvement in self-care’, the nurse assisted Conrad with daily skin control and skincare, and provided him with assistance and instruction on strategies to optimally wash himself (d510), care for his body parts (d520), regulate urination (d5300) and defecation (d5301), and dress himself (d540). In addition, the nurse worked together with the physical therapist and occupational therapist in instructing Conrad on preventative measures that helped him to more effectively look after his health (d570).

Interventions Provided by the Social Worker

The interventions to address cycle goal 3 ‘economic self-sufficiency’ was primarily under the responsibility of the social worker. For example, for the intervention target d850 Remunerative employment, the social worker was in contact with Conrad’s employer to explore the possibilities for returning to work in consideration of Conrad's prognosis and functioning limitations, as well as the option for early retirement, given that Conrad's injury occurred less than a year before he had been scheduled to retire.

The social worker also took steps to clarify Conrad’s eligibility for insurance coverage and registered him with the social security agency to initiate the process for acquiring social services and financial benefits. Furthermore, the social worker assessed Conrad's legal and insurance situation, and explored with him the various options for ensuring his economic self-sufficiency. The interventions provided by the social worker addressed the intervention targets of e570 Social security services, systems and policies and e580 Health services, systems and policies.

As revealed during the initial comprehensive assessment, one of the major challenges that Conrad faced in planning for life after rehabilitation was his wheelchair inaccessible home. Conrad's house was historically protected, meaning that making architectural modifications to the house required following stringent regulations, and not all modifications were allowed. Addressing the intervention target of 155 Design, construction and building products and technology of buildings for private use, the social worker provided ongoing counselling and coordination of architectural modifications, including clarification of financial coverage, financial planning, organisation of house inspections, discussions with architects regarding the costs of the modifications, and assisting with the application for construction permits with the local municipality.

While most of the interventions were conducted within the three and a half months of Conrad’s Rehab-Cycle®, the social worker’s interventions and support were provided beyond this particular Rehab-Cycle® and beyond his stay at the rehabilitation centre.

"...Conrad's Rehab-Cycle® and his stay in the rehabilitation centre had to be extended..."

Three months after the start of the Rehab-Cycle®, the artificial opening that was created to release Conrad’s blocked intestine was surgically closed. This required that a number of physical therapy interventions be cancelled. This resulted in increased joint stiffness and pain. It also meant that Conrad had to learn alternative strategies for emptying his intestines and bowel. Consequently, Conrad's Rehab-Cycle® and his stay in the rehabilitation centre had to be extended in order to address the joint stiffness and pain, and to improve his bowel management skills.