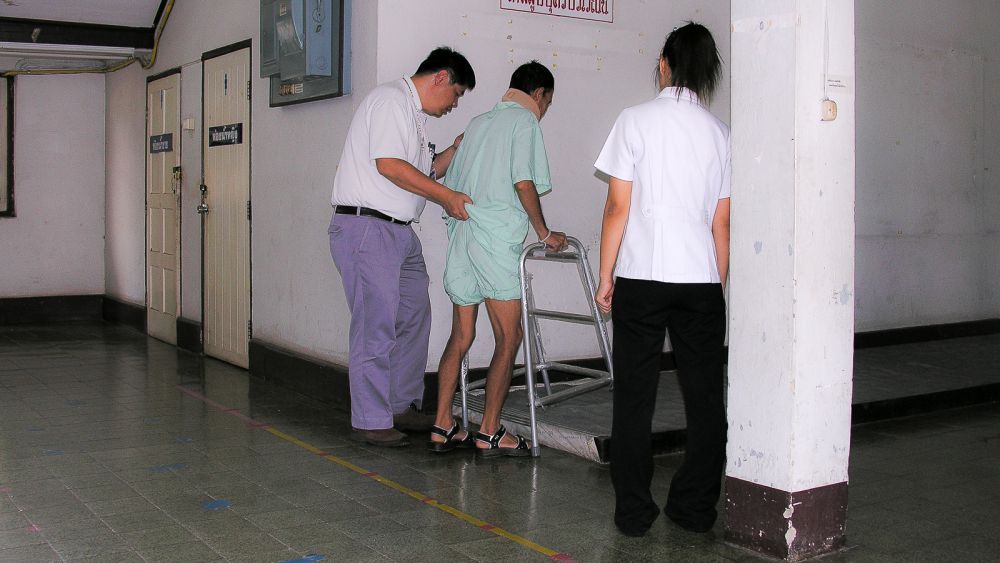 After about six weeks of rehabilitative interventions, Mr. Dee's functioning was re-evaluated to see how well he had progressed.

The evaluation revealed that Mr. Dee improved greately in both motor functions and sensitivity in the hands, arms, and legs, changing his American Spinal Injury Association (ASIA) impairment scale grade from C to D. The main change was that before the intervention phase Mr. Dee's active movement and full range of motion (ROM) was not possible against gravity; after intervention he was able to move more than 50% of key muscles below the neurological level of injury against gravity and even with moderate resistance. These improvements also translated to increased Spinal Cord Independence Measure (SCIM) scores,26 going from a score of 21 (see table 1) to 72 out of 100 (see table 5).

Better self-care, respiration, bladder and bowel management, and overall mobility were also evident. Areas that showed only slight improvements were Mr. Dee's ability to climb stairs and transferring skills. Spasticity also remained problematic. The spasticity negatively impacted Mr. Dee's walking ability significantly, consequently increasing his risk of falling. As a result he had to continue using an assistive walker to support him while walking. Nevertheless, all of the cycle goals Mr. Dee and his rehabilitation team set were achieved. In fact, his self-care abilities even exceeded expectations – considerable improvements in hand and arm functions and fine hand use enabled him to perform all of the self-care activities independently, even if time-intensive. This meant that Mr. Dee no longer needed his wife’s assistance for self-care.

Table 6: ICF Evaluation Display; ICF Qualifier: rate the extent of problems (0 = no problem to 4 = complete problem) in the components of body functions (b), body structures (s), activities and participation (d) and the extent of positive (+) or negative impact of environmental (e) and personal factors (pf); Goal Relation: 1, 2, 3 refers to Cycle goal 1, 2, 3; SP refers to Service-Program goal; Goal value refers to the ICF qualifier to achieve after an intervention; Goal achievement: + means achieved, - means not achieved

Mr. Dee’s strength has improved greatly, and he should be able to walk independently with an assistive walker – at least for short distances. His arm and hand functions may also still improve. A problem that will remain is that he will no longer be able to work as a farmer.

Challenges in Reintegrating into the Community

Despite significant advances in various aspects of functioning, Mr. Dee faced significant challenges especially in reintegrating into his community.

For example, there were a number of issues related to accessibility. Mr. Dee's house was built on stilts with no stairs or any other structure to enable him to enter and exit independently. The rehabilitation team recommended that stairs be built to facilitate access. Unfortunately, Mr. Dee was responsible for covering the cost of building the stairs, since financial resources for such modifications were not available. Another accessibility issue that posed a challenge for Mr. Dee's community reintegration was related to toileting – the toilet was located 20 metres from the house. The rehabilitation team recommended constructing a portable toilet consisting of a plastic chair and pail that Mr. Dee would be able to also use at night.

Issues that were still unresolved at end of the Rehab-Cycle® were Mr. Dee's employment situation and ability to support his family financially. Given the limitations Mr. Dee continued to experience the end of rehabilitation, returning to work as a farmer was unlikely. Unfortunately, with his level of education, his return-to-work options were also limited. The rehabilitation team had hoped that Mr. Dee would be eligible for state disability funds. However, the team social worker informed Mr. Dee that the disability resulting from his injury may not be covered by the state disability fund system. At the end of Rehab-Cycle®, Mr. Dee returned home anticipating that once his daughter completed her studies, her future income could be used to support the family.

"In general, in the rural areas of Thailand, money may not play the most important role. Family support and subsistence farming often make up for where there is a lack of financial resources."

Care In Low and Middle-Resource Countries